In June 2017, ABB, Enervalis, Eandis, EnergyVille and KBC joined together as part of the ‘MSLEC’ project, a feasibility study that examined the distribution of roles in a Local Energy Community (LEC). Having finished investigating the various scenarios for the former Eandis site in Mechelen, they have now discussed their experiences in this interview.

Mechelen is investigating new ways of responding to population growth: forming urban zones around modern residential neighbourhoods. Take the Rode Kruisplein: after Eandis moved its activities elsewhere, there was room for a new residential neighbourhood with 266 homes and, putting sustainability and clean energy first, Mechelen has made the most of an opportunity to establish a Local Energy Community (LEC).

This caught the eye of Enervalis and ABB. The two companies had collaborated on the development of a micro-grid controller. The MSLEC project was the ideal opportunity for them to put their micro-grid controller into action. And when a call for feasibility studies was made in May 2017, Flux50 responded by putting them in touch with a series of partners who were interested in studying the different roles played by companies in LECs. Wim Cardinaels from EnergyVille, Luc Picard from ABB and Freddy Van Bogget from KBC looked back on the project in a group interview.

Luc Picard: "Invest in the process. It will pay for itself twice over. Your consortium partners are important contacts with whom you’ll begin to collaborate in countless areas."

How did the project proposal develop?

Wim Cardinaels: ‘There have already been a lot of studies into which technical solutions are possible in the context of Local Energy Communities. But there had never been a proper examination of the division of roles in an LEC. ABB and Enervalis contacted Eandis and EnergyVille with this as a study theme.’

Luc Picard: ‘You’ll see that the network manager role is strongly regulated, which is not particularly conducive to innovation. It lowers clarity for anyone who optimises energy with the Enervalis PaaS system Smart Power Suit or investing in the ABB Smart Energy Module, photovoltaic installations, battery systems, charging stations and so forth. The underlying premise is still that the invoice for the end-user can’t be any higher.’

Wim Cardinaels: ‘Our collaboration aimed to develop a working role-distribution business model for a Local Energy Community; ABB and Enervalis were technical players, Eandis the network manager, KBC the financer and EnergyVille a research partner.’

"If you want to innovate, don’t put things off. Make contacts yourself and dare to jump. Be open, look for trust, look for everyone who has added value for you. Think long-term, because otherwise, you’re best off not being onboard.’ Freddy Van Bogget KBC

Luc Picard: ‘At first it was a strange, hesitant, wait-and-see type of situation. We wondered what agenda and mentality everyone else would bring to the table. We always had our own supporters in our thoughts, and their vision. By writing the project proposal, we already started to think from a shared perspective.’

Freddy Van Bogget: ‘KBC jumped on board at the very last moment. I suddenly found myself, as a banker, sitting at the table with very technical people, wondering what role I could play and how I could bridge the difference in technical knowledge. Thanks to the info sessions and the Smart Energy Academy by Flux50, the gap shrank quite quickly. Gaining knowledge of the energy-transition world was one of the main motivations KBC had in joining Flux50.’

Wim Cardinaels: ‘The openness and the commitment of every party ended up being a major factor in approaching each other. This meant every partner found a place at the table, resulting in added value.’

Luc Picard: ‘It was a question of maintaining momentum, which we managed by setting a very active schedule: a weekly tele-conference and a monthly physical meeting. Intensive consultations added to the trust and the openness.’

Freddy Van Bogget: ‘This made obstacles to the ‘feasibility’ of the project quite clear. And knowing the Eandis site project was a concrete project, solutions needed to be found.’

Wim Cardinaels: ‘This more intensive approach was necessary. We tackled a lot at a two-day workshop. The underlying theme was the Business Model Canvas, one of the required deliverables from the study. It put a sort of top-down work process into effect. We were forced to make very high-level choices that could only be made by looking at available data for supporting decisions on a low level. The goal was to eventually come to the best possible calculations.’

Freddy Van Bogget: ‘As Excel is Luc’s forte, we could develop a rough tool that we could use for calculations in other cases. The Business Model Canvas is an enabler for the process.’

Wim Cardinaels: ‘The openness and the commitment of every party ended up being a major factor in approaching each other. This meant every partner found a place at the table, resulting in added value.’

What about the other stakeholders?

Freddy Van Bogget: ‘The Mechelen city council was not part of our consortium, but was always there for us. Bond Beter Leefmilieu actually took part in the two-day workshop with us. A good collaboration with all stakeholders was vital for support, but if we allowed too many participants into the consortium, it would have become too big and made the management of the project more difficult.’

Luc Picard: ‘Partners from outside the energy sector were a definite plus. At ABB, the participation of a bank aroused a lot of international interest.’

What is your recipe for success?

Freddy Van Bogget: ‘For me, there are three key factors: the attitude of the participants, the drive and the process enablers. Starting with active engagement from all participants is crucial. You won’t get very far if you plan on tagging along opportunistically from the sidelines. And you’ll end up stuck if you’re not prepared to openly share your knowledge. You can forget it if you don’t have faith in your teammates.’

Luc Picard: ‘For the drive, Wim had invaluable experience. The tools he extended helped to create a good content balance. If you zoom in too much on details, you threaten the ability to do it over again. If you start with too many factors, you risk having an empty ‘unfeasible’ study.’

Is there anything you would do differently?

Freddy Van Bogget: ‘It was a success for everyone involved. I would repeat the process and approach it the same way. In a repeat study, the energy and time devoted to administration maybe could be reduced?’

Freddy Van Bogget: "The Business Model Canvas is an enabler for the process."

What role did Flux50 play?

Freddy Van Bogget: ‘Flux50 stands for co-creation. And if you ask me, that is the only way to achieve substantial innovation. The way the groups worked together ensured that different projects didn’t need to devote themselves to solving parallel issues.’

Wim Cardinaels: ‘Flux50 supported us in the administrative subsidy trajectory, initiated communication and created motivation within each consortium. If we came to a dead end trying to answer a specific question, we could always turn to Flux50.’

Freddy Van Bogget: ‘I would also like to add that as an organisation, Flux50 has the professionalism and objectivity to open doors that would otherwise be closed to commercial organisations.’

What would you recommend to other parties that want to innovate?

Freddy Van Bogget: ‘Do it. Don’t wait. Don’t put things off. Make contacts yourself and dare to jump. Be open, look for trust, look for everyone who has added value for you. Think long-term, because otherwise, you’re best off not being onboard.’

Luc Picard: ‘Invest in the process. It will pay for itself twice over. Contact with other consortiums will become easier while the threshold for new projects will be as good as gone. Your consortium partners are important contacts with whom you’ll begin to collaborate in countless areas. If you have a question, even if it has nothing to do with a project you’re working on together, you call them for advice or a referral.’ 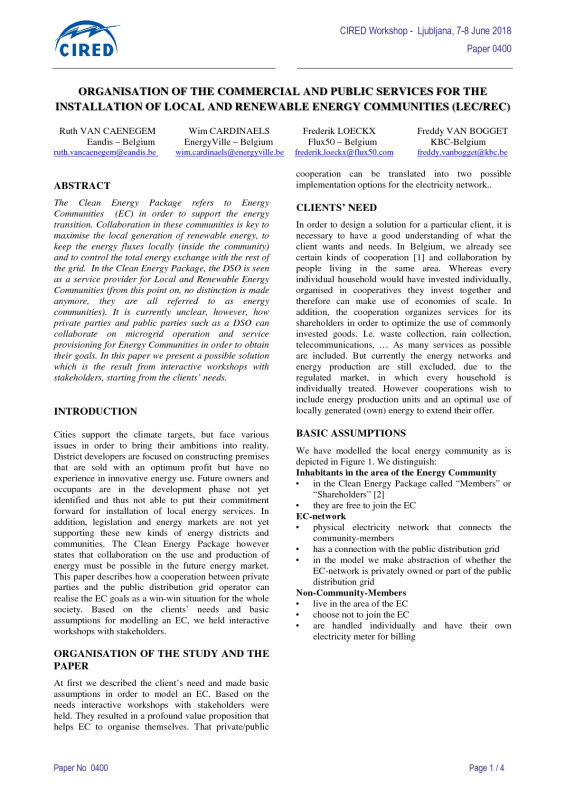 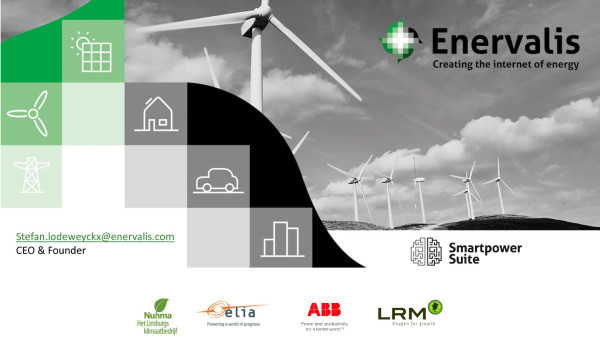 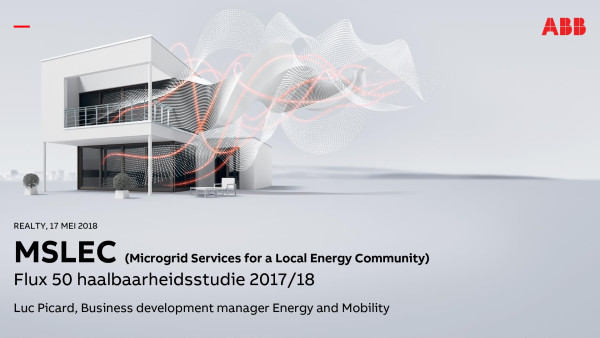 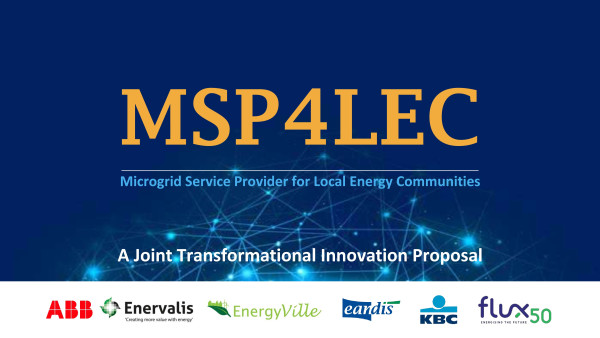